Rubble from the Buses

One of the best vantage points to view rubble is from the top-deck of a double decker bus
This demolition of an office building near Old Street round-a-bout was monitored for
several months, all photos were taken from buses passing by the site

The ubiquitous ‘John F Hunt’ carried out the demolition of this early 1980’s office block – 18 April 15
There was a high fence surrounding, but luckily the no. 76 bus going south stops just opposite

A week later the rubble had grown, concrete, steel and stone fully exposed – 25 April 15
S.P.A.R would like the new development to have at some of this
rubble from the previous office block in its foyer

After several months there was still a prodigious pile – 29 July 15
The hordings advertise ‘The Atlas Building’, a private development reaching over
38 storeys high in an area described on it’s website as ‘urban and achingly cool’
It is also in an area with a great need for social housing

A similar study was carried out near Borough Station, this development ‘Brandon House’ is  well
hidden, only from the top-deck of a No. 35 bus could the vast banks of rubble and soil be seen
This development promises over 80 homes, all appear to be for private ownership

Rubble from the Roof-Tops

Another fine vantage point is from the top of a nearby building
This view is from the window of The Triangle Building, Space Studios off Mare Street, E8

This site was a petrol station and is being advertised as 139-141 Mare St by Blenheim Bishop
‘with a potential for residential development’. Planning permission had previously been
refused by Hackney Council, it is likely to be a mixed-use commercial and residential development
S.P.A.R would like some of this varied rubble to be retained

Rubble from the Streets

This curious arrangement of rubble was found on Kingsland Road
unclear whether these were building materials or salvaged from a demolition
members debated its merits, a rare example of rubble standing apart
from a development scheme

I can no longer contain my rage. The rubble at Ponders End has continued to grow unabated. Not only that but the contractor has been ‘losing dust’ by neglecting to use a water hose while dumping said rubble. The result is surely a net gain in profit as thousands of grammes of ‘useless’ dust are carried away by the hot wind, covering residents’ homes and possessions in a fine grey coating. It is impossible to assess the true excesses of the pile from a single vantage point but the attached images give an indication of the enormity of the heap. 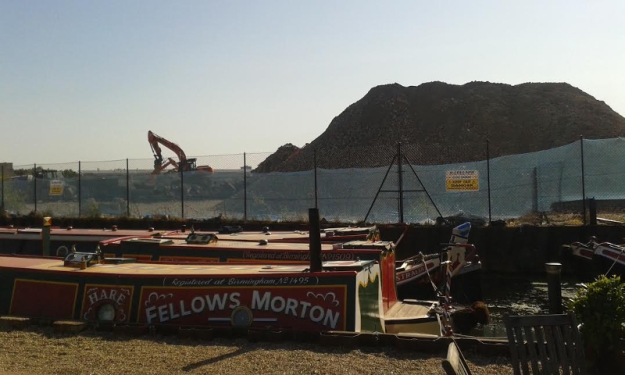 Photo by JPL
These are identified as Allonby, Channel and Studland Houses
on the Ocean Estate, west of Aston Street, E3 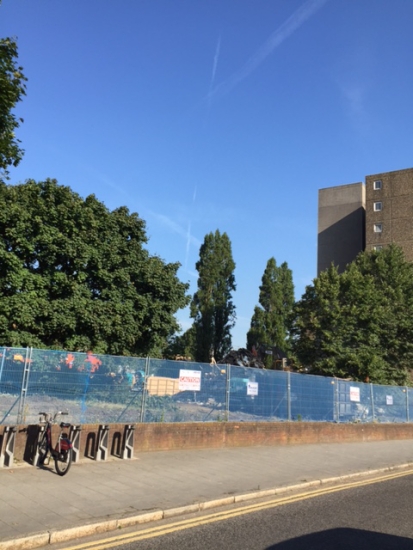 Tower Hamlets Council website says: ‘225 new homes will be built on the site formerly occupied by these three houses. They will be built to a modern and sustainable standard by the East Thames Housing Association. 92 of these will be affordable rented properties, and 29 will be for shared ownership. This means that 54 per cent will be affordable housing.’

This means nearly half will be very much private and unaffordable, S.P.A.R does not feel this justifiable, despite all the admirable rubble created by the works, how affordable will the other 54 per cent be?