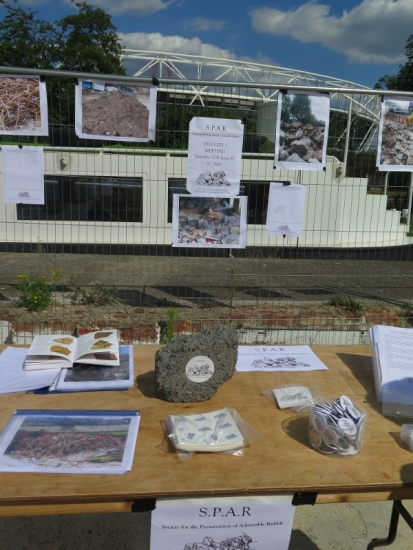 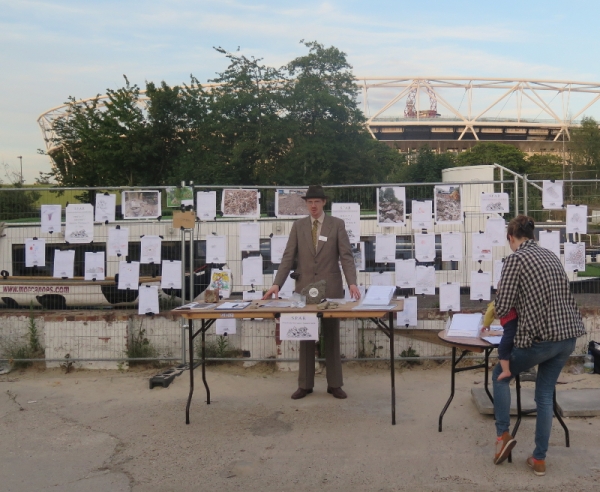 It will be an opportunity to meet Brian Guest (above) to discuss the rubble
being created in Hackney Wick and elsewhere in London. He will highlight
the campaign to have any rubble created by demolishing homes and businesses
installed in the foyer or other communal areas of replacement developments.

DEN-CITY 1: Friday June 26th, 6-9pm/ Saturday June 27th , 2-9pm/ Sunday June 29th, 1-4pm
A temporary utopian city of installations, dens and assemblages. Colourfully, re-purposing,
and recycling on the theme ‘Work in Progress’ . DEN- City will be mushrooming on a
prime piece  of land by the Olympic site. Forget Glastonbury, this is a free space,
an art city  and the only place to be in response to the London Festival of Architecture.

S.P.A.R look forward to seeing you at DEN-CITY 1 in Hackney Wick
Thank you to the tireless Rebecca Feiner for the opportunity 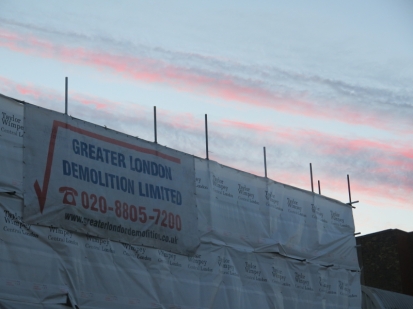 The sun is setting over Dalston, with the ongoing demolition of the
old ‘Peacocks’ Department store on Kingsland High Street
The new development will feature 83 private apartments
with apparently 15 ‘affordable’ flats/shops. 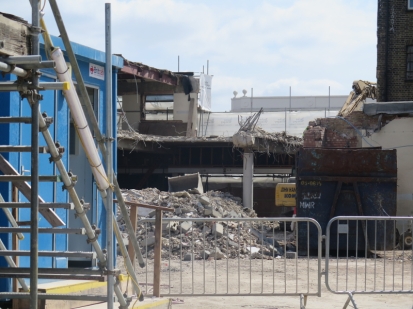 Developers Taylor Wimpy are demolishing all of the
building before turning the site into ‘FiftySevenEast’
It is a closed site and the Society was lucky to
catch a glimpse of rubble creation taking place.

S.P.A.R have little time left to save this rubble, there is a great
variety here, if not in colour certainly in shape and volume.
The new development is due to finish in 2017 and a
1 bedroom flat will start at nearly half a million (£470,000)! 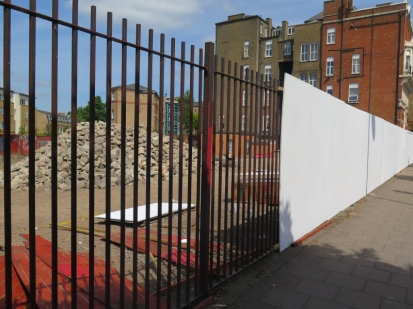 Red fencing has long adorned this site on Kingsland Road,
as detailed in April’s report. It has recently received a
white fence replacement, revealing behind a single
mound of rubble, could this be a sign of further development? 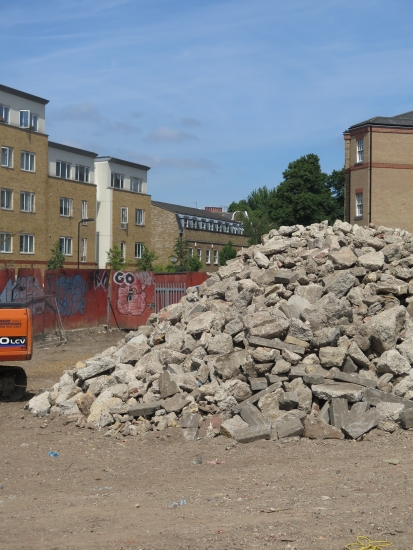 The Society is investigating the plans for this site.
This neatly stacked pile of concrete and brick would
be wonderful adorning the foyer of the new building/s. 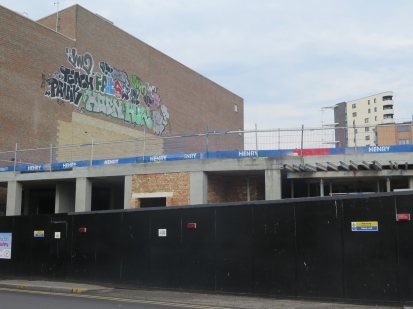 As detailed in our November 14 report, these local businesses
and artist studios in Dalston were torn down with little notice.
Still no aspirational billboards here and ongoing construction
has been slow. The Society are still trying to find out who will
eventually be taking delivery of the admirable rubble.

Email your pictures of Admirable Rubble to
preserveadmirablerubble @ gmail.com and you
too will become a member of S.P.A.R

S.P.A.R Report: Behind the Red Fence plus Members Photo (April 15) 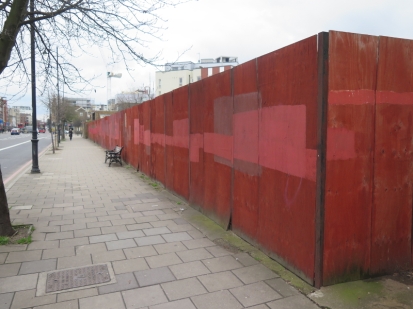 These barriers have long been on Kingsland Road, E8
It is hard to recall when there was last a building here
It has recently been used for private car parking 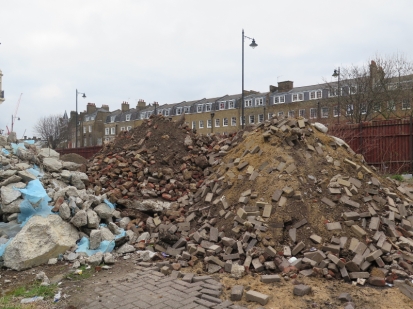 Bricks and stones of many sizes, an extensive paved area
was being dug-up, perhaps prior to foundation work

There is no entering this site, and not uncommonly
there is no indication of what is to come.
Planning permission had previously been refused on this site

Members of the Society are always ready to document
new rubble configurations, there is so much rubble
to be found in London, and it is spreading

The red fence from the Southern end,
it is not far from the demolished Haggerston Estate
S.P.A.R are opposed to unnecessary fencing
such as at the Aylesbury Estate in South London:
https://fightfortheaylesbury.wordpress.com/

Fascinating elevated photo from JPL in Deptford
Demolition of the SR Building in Childers Street, SE8
They have kept the frontage, will this be entirely
‘luxury apartments’? It seems likely as it is
an Aitch Group / Mura Estates development

Members and Non-Members send your photos to
preserveadmirablerubble (@) gmail.com

On Saturday 28th February Brian Guest from S.P.A.R was invited by Matteo Basana to
Resonance 104.4 fm’s The News Agents to talk about the
Society’s aim to preserve the rubble of the UK in the foyer of new developments
The News Agents is curated by Jude Cowan Montague, and this programme was
guest curated by Matteo Besana. Listen to the full programme on Mixcloud:
https://www.mixcloud.com/Resonance/the-news-agents-28th-february-2015/
www.resonancefm.com

S.P.A.R found a trajectory of rubble from
London Bridge station to Borough
This ‘development’ is close to Borough Station

However, close to the Resonance FM studio was a large
demolition site with plenty of exposed rubble 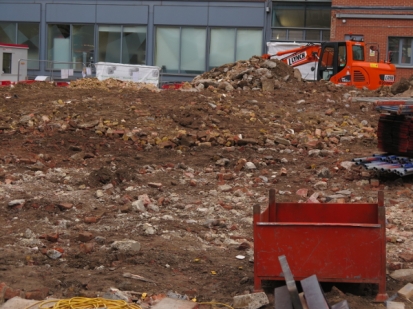 A plethora of bricks, the red and yellow variety,
with broken concrete and stone abound

You could almost reach these bricks
Will this brick stack stay remain in the new development?

King’s College London are the clients for
127 -143 Borough High Street, Guy’s Hospital is very nearby.
8 retail units and a 100 room hotel are being planned
S.P.A.R could not find any housing provision

It is a great shame to lose all this rubble,
perhaps some could be moved into the
foyer of the Shard? 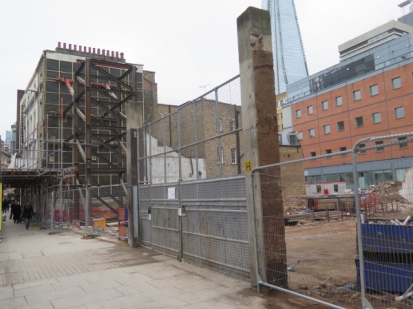 Gates blocked the site, walk down Borough High Street
you will soon reach Elephant & Castle and
the Aylesbury Estate, Andrew Cooper talked about the
Fight for the Aylesbury Estate on The News Agents
https://fightfortheaylesbury.wordpress.com/

One of our new members added this sticker, denoting it
as a S.P.A.R site of designated interest

This building at the north end of London Bridge,
will likely be replaced by another
office block – S.P.A.R’s principles remain,
keep a pile of this rubble in the new building

The Society ask please retain this tangle in the new development

It was months before the demolition started, the Society noted a profusion of graffiti 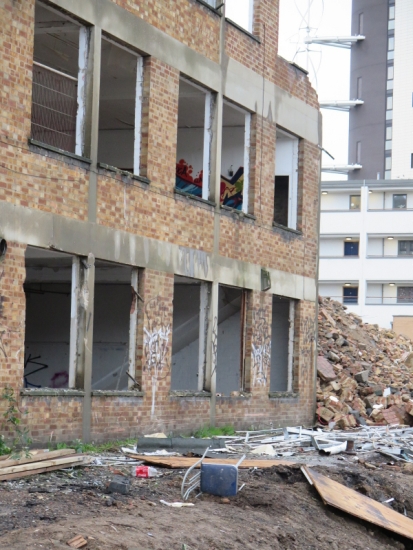 Only a shell remained of the building nearest Dalston Lane 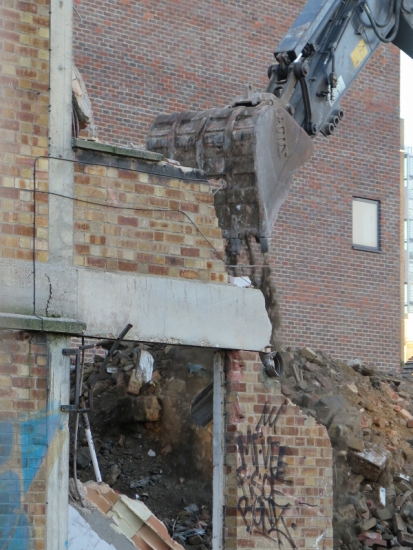 By 16 December the digger was busy destroying the final building

By 16 December the buildings were in their last days

The Society visited on 5th January 2015 and all buildings were demolished, the next
stage is to find the developers and keep this rubble for the foyer of new building

The Society has noted the increase of rubble in
Dalston, North-East London
This great profusion and variety of rubble was found
on 13 November 2014 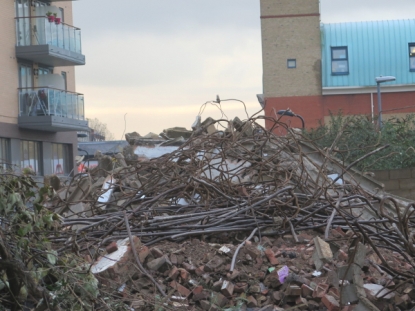 Many bricks looked quite unharmed by the demolition

Crushed and twisted metal
The developers hoardings are not yet up
Is this to be retained in the new building? 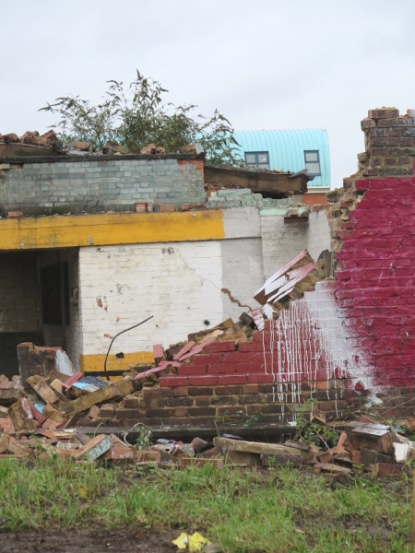 S.P.A.R will continue to report on demolition sites across the UK
Members and Non-members can send photos of admirable rubble to:
preserveadmirablerubble (@) gmail.com

The Society found this demolition site right by the sea 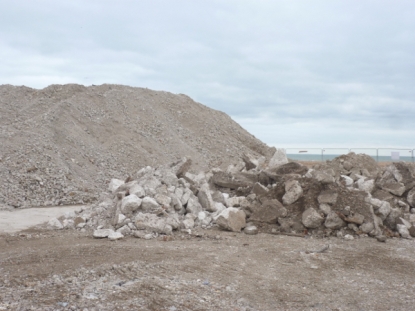 The Folkestone Harbor wall was being reconstructed 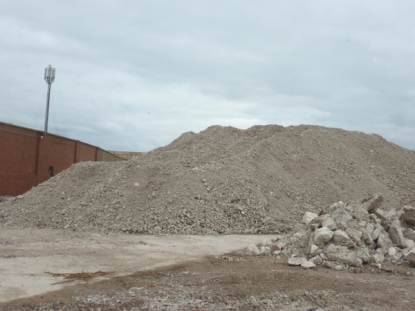 Were buildings demolished here as well?

If you know of any buildings on this site of admirable rubble
S.P.A.R members of Folkestone contact the Society
by emailing:
preserveadmirablerubble (@) gmail.com 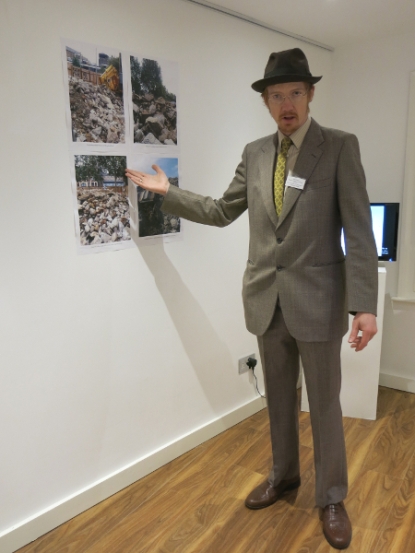 The Society was given the opportunity to present the S.P.A.R Centre Camden during the exhibition
“Rhizome’0002 “The Indian Summer” at the Camden Image Gallery from 17th – 20th October 2014.
Curated by Geraldine Gallavardin – http://lab451london.com/

Founder and General Secretary Brian Guest was present on Thursday 16th October (6-8pm)
and Saturday 18th October (5-10pm) to talk about all aspects of the campaign.
There many new members who were encouraged to draw their
ideal admirable rubble and contribute their own rubble stories.

A new S.P.A.R member touches rubble, someday this
rubble will return to it’s home in Haggerston

Nunhead Library kindly allowed the Society use the foyer area to show examples
of admirable rubble, visitors could join the Society and draw their ideal rubble 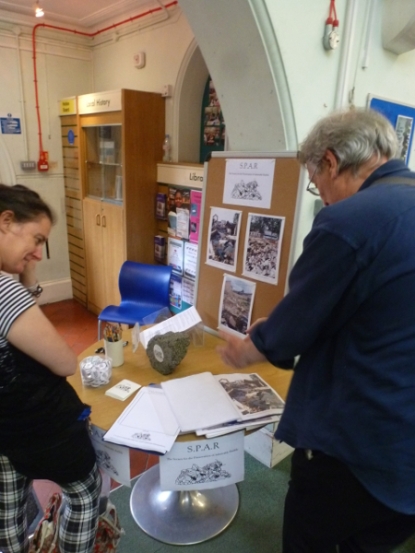 New members contemplate the SPAR objectives: to leave physical evidence
of demolished buildings in the communal area of buildings replacing them 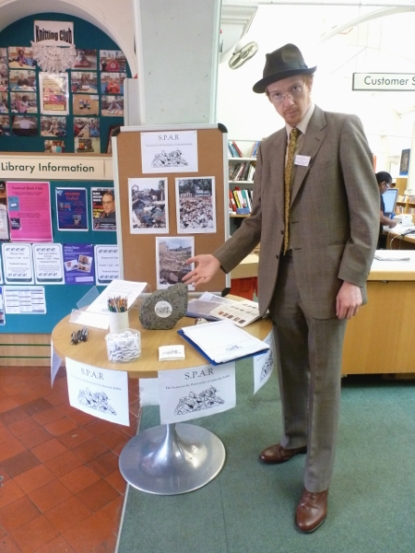 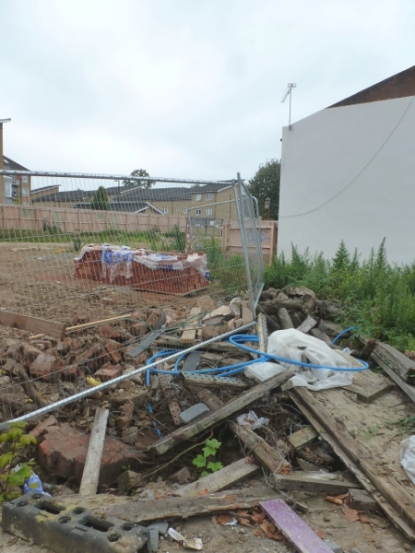 SPAR update: The rubble at the former Nunhead Community Centre is  greatly reduced.
Only the foreground mixture of brick and wood remains
Southwark Council please retain some of this
rubble for display in the new building!

Capital Tower: In Stratford the rubble is hidden behind colourful hordings

Is this mass of metal also rubble?
Rubble does not need to be just bricks and mortar 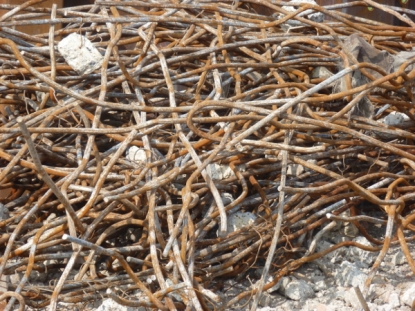 This tangle should at least have a home in
‘Capital Towers’, S.P.A.R can make that happen

At Stratford Riverside nearby there was magnificent rubble 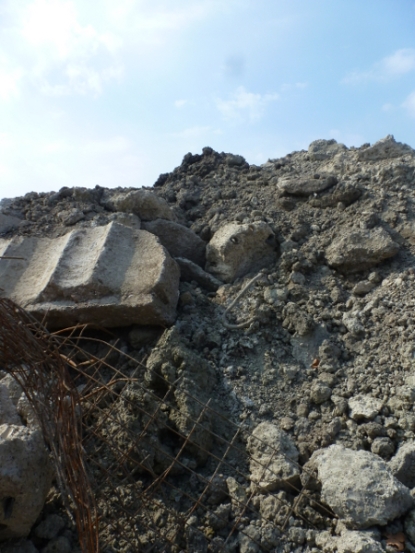 This building is still standing yet there is much rubble inside 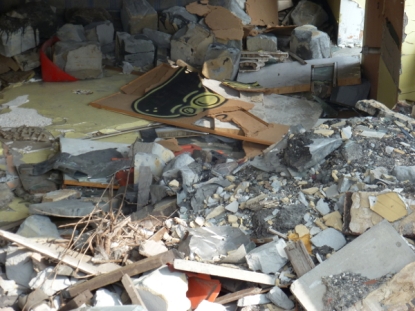 This is minor rubble, but rubble never-the-less 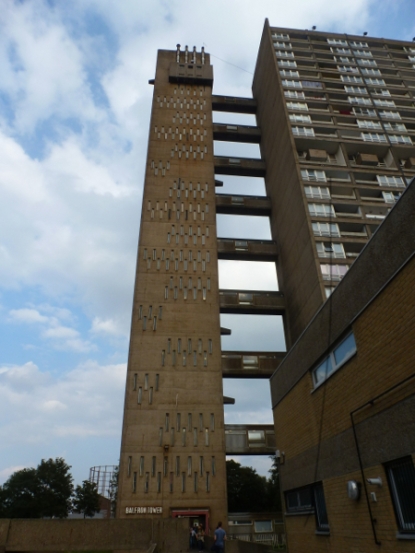 We continued onto Balfron Tower, Erno Goldfinger’s 1967
building. Soon the inside will be rubble when it gets
‘renovated’ for private apartments 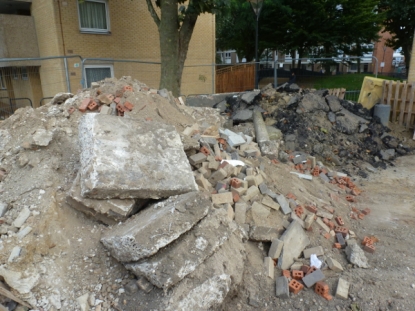 Close to Balfron Tower there was a fine example of SCALE in rubble
Note the large slabs to the left, the broken concrete below
and smaller red bricks strewn at ground-level

The Society for the Preservation of Admirable Rubble (S.P.A.R)
Create a free website or blog at WordPress.com.